Need Help With Your New Years Resolution Job Hunt?
We Have Just The Tool For You!
The Interviewing Series 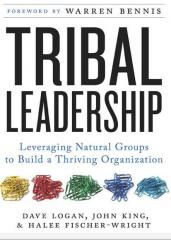 This review was submitted by TNoxtort.

I really enjoyed this book that discusses how to quantify a corporate culture, improve the corporate culture, and then strategically plan within this corporate culture. I found it because the author was the keynote speaker at the last Toastmaster International Conference. He had an article in the monthly magazine, which piqued my interest.

The book starts by defining the 5 stages of a culture. Stage 1, the lowest are the people who believe life is terrible. Stage 2, which represents a majority of people in corporations, believe their life is hard, but that others have it good. Stage 3, also in many corporations believe they are great, but resort to manipulation, fear, and other tactics rooted in insecurity to get what they want. Their relationships are dyads. Stage 4 is where you want to be, where they believe the team is great and relationships are more triad in nature. Organizations at Stage 4 can touch Stage 5 at times, where a "life is great" mentality exists.

You can tell what stage a person is in by the language they use. A good tribal leader learns the language of each stage, and helps them move up, one stage at a time. To move from Stage 2 to 3, the tribal leader will help show them that life can be good at times. To move from Stage 3 to 4, the thrust of the book, the tribal leader introduces people to others, creating triads. One does not use the tactics to move someone to Stage 4 if they are Stage 1 or 2, only if they are Stage 3.

A major part of Stage 4, where one wants to be, is having organizational values. Not values decided from the top, but values discussed from the bottom. The book goes into how to identify them. Then the book discusses strategic planning from the tribal perspective. It starts with values, then bridges to a noble cause. From there, one can decide the desired outcomes; the authors are against the word "goals," claiming it is more crisis oriented. Then the team asks what its assets are, and then moves to several questions - can the assets support the outcomes? If so, then they come up with behaviors, or actions, to achieve them. It's a neat approach to strategic planning.

The authors draw on studies of many companies, including hospitals, Amgen, various start up companies, and others. I am not a manager at my company, but I am a team leader and have junior folks who take direction from me. For folks I perceive to be at Stage 3, I uncover what their values at work are, tie what we do to their values, and introduce them to others, thus creating triads. For folks I perceive to be at Stage 2, I've been spending more one on one time, trying to help them learn and showing them that their contributions are valuable. A lot of people helped me accomplish a lot this year, and since none of them report to me, I sent them all recognition points with words that convey how valuable their contribution was, especially folks whom I perceive to be at Stage 2. I've also joined the books Linkedin group.