Guanxi "The Art of Relationships" MS, China and Bill Gates 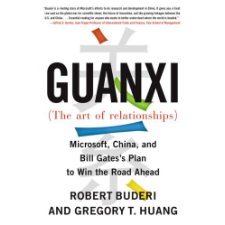 This review was submitted by jhbchina.

Is China finally beginning to become an innovator?

Guanxi is not a book that will give any clear actionable lessons for doing business in China, or for how to better understand the Chinese culture of “Guanxi”, until the end. This book is more related to how Microsoft started it’s China Research Center, and the senior management team that built it from scratch. For history and technology buffs, it is an interesting story that shows how much of today’s new technology is actually coming from China.

For quite some time, the leaders of China have felt that China’s last challenge for completing its modernization would be judged by the country’s industries ability to be global innovators. This book recorded the history and events behind Microsoft’s efforts to be the one of the first multinationals to tap into China’s best of the best researchers, so that Microsoft could win in China and globally.

I first became aware of this book several years ago, when I searched MIT World - Distributed Intelligence web site (http://mitworld.mit.edu/), looking for lectures on China. I found the story interesting and added the book to my reading list. I am glad that I did.

“Guanxi” is full of details related to how Chinese “Hai Gui” (pronounced hi gway – for sea turtles, which is the Chinese term for Chinese nationals returning to China) senior researchers help Microsoft build a R&D facility in China. The authors spend most of the time discussing the challenges these individuals had recruiting students, developing relationships with the Chinese government and Educational institutions while still keeping their eye on the prize – developing technology that would make it into Microsoft products for China and the world.

The most famous individual in this book is not Bill Gates, it is Kai-fu Lee. The book reveals how he set the tone for Microsoft to build the lab, and how his career advanced within MS until he jumped ship to support Google’s efforts to start a research lab in China. This lead to a high profile lawsuit between MS and Google, related to Kai-fu Lee’s non-compete and non disclosure clauses. In the end, MS and Google came to closed settlement. This past September 2009, Kai-fu Lee left Google to setup his own software incubator company in Beijing.

Ask any young Chinese IT professional who Kai-fu Lee is and they all perk up with excitement. “You know who Kai-fu Lee is, AMAZING!” they will respond. The book regularly speaks about his efforts to motivate and inspire Chinese students to develop quicker and think out side the box.

In addition to Mr. Lee, the book also focuses on how the lab identified goals, made technology and product presentations to senior MS product management including Bill Gates and Steve Ballmer related to all MS products such as Vista, IE and many more. The book also touches on how MS invested in China by outsourcing millions of dollars in jobs to China in many different avenues. Some of them were directly related to positions within MS China’s research facility; others were to fund Chinese university research. From this book it is clear that MS not only wanted to tap China’s brightest talent, but that they also want to improve their position in the market too. Without that China talent, MS would have had a tougher road to success in China.

Finally, I recommend that any one representing a company’s research efforts in China read this book. It is quite insightful. For others that are interested in research and IT history this book is an easy read about how some of the latest technology is coming from China and not the US.